Back to Local Labor News

Who's Helped by Raising the Minimum Wage?

More than 60 million people in U.S. households depend on the earnings of a low-wage worker, according to a new report released on Tuesday.

The research shows that most low-wage workers are frequently the primary breadwinners in their families and they are not, as commonly thought, teenagers with few skills still living with their parents, according to the report by Oxfam America and the Economic Policy Institute.

In fact, those workers are closer to 30 years old, not 18 and are living in households with several dependents. Read entire article 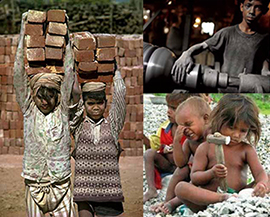 List of Goods Produced by Child Labor or Forced Labor

The sixth edition of the "List of Goods Produced by Child Labor or Forced Labor," mandated by the Trafficking Victims Protection Reauthorization Act of 2005, was released today by the U.S. Department of Labor's Bureau of International Labor Affairs (ILAB). In accordance with Executive Order 13126, ILAB also published an initial determination to add carpets from India to its "List of Products Produced by Forced or Indentured Child Labor." In addition to publishing this initial determination regarding Indian carpets, ILAB re-released its EO 13126 List from 2013 with additional specific information about the listed products.

The International Labor Affairs Bureau (ILAB) maintains a list of goods and their source countries which it has reason to believe are produced by child labor or forced labor in violation of international standards. The list is intended to raise public awareness about child labor and forced labor around the world, and to promote and inform efforts to address them. A starting point for action, the List creates opportunities for ILAB to engage and assist foreign governments. It is also a valuable resource for researchers, advocacy organizations and companies wishing to carry out risk assessments and engage in due diligence on labor rights in their supply chains.

The congressional proposal to deal with a supposed crisis in worker pensions by allowing trustees to slash the benefits of already retired workers to shreds is heading toward enactment.

Reps. John Kline  (R-Minn.) and George Miller (D-Martinez), the chairman and ranking Democrat on the House Committee on Education and the Workforce, told reporters on a conference call late Tuesday that the measure is being passed over to the House Rules Committee, which will move it as an amendment to an omnibus spending bill, as early as Wednesday. Senate action will follow, presumably no later than Thursday, when Congress departs for vacation.

The proposal is aimed at multiemployer pension plans, which are generally negotiated by a union to cover employees of all companies in a given industry. About 1,400 such plans cover about 10 million workers, according to the Pension Rights Center. About 150 to 200 of the plans, covering 1.5 million workers, are seriously underfunded and could run out of money sometime during the next 20 years.

The congressional proposal allows trustees of those plans to slash benefits sharply for retirees to give the plans a longer lease on life. It requires a vote of approval by active workers and retirees before that could be done -- but some pension advocates say that would only pit workers against retirees, with the latter coming out poorer.  Read entire article

Published November 26, 2014 in the Marysville Globe

Union Sticks Up for Walmart Workers

MARYSVILLE – Union leaders want to give Walmart a black eye on Black Friday.

About 20 union supporters, including state Rep. Mike Sells and Stanwood Mayor Leonard Kelly, were at the Marysville Walmart on 64th Street Nov. 26 before noon. Another group plans to be at the Walmart in Tulalip on Black Friday itself.

The union members came from all types of professions and trades. Similar efforts are taking place at all 64 Walmarts in the state and also nationwide. The effort takes place in about 20 minutes. They go inside and give employees badges and talk to shoppers outside.

Walmart representative Kayla Wayling noted the union members are paid to demonstrate against the company on Black Friday, and "They are not representative of our 1.3 million associates."
Tom Geiger, communications director for UFCW 21, said the union is "a voice for working America." It wants to build a "powerful union that fights for economic, political and social justice in our workplaces and our communities." Read entire article

How Big Money Is Taking Over Education Politics

Most folks in the Democratic Party have a problem with the Citizens United ruling by the U.S. Supreme Court that permitted goo-gobs of corporate and private interest cash to be dumped onto our elections. The party’s platform supports amending the Constitution to reverse the decision. President Obama has also called for such an amendment, and Hillary Clinton has said she would consider supporting it.

Most Democrats are also alarmed by the enormous amounts of cash funneled into the electoral process by folks like Karl Rove and the Koch brothers, who use corporate and private interest money to overwhelm citizen voice in elections and usurp democracy.

But if you’re a Democrat, you should know the influence buying unleashed by Citizens United and perpetrated by people like the Koch brothers are at work – with the blessing and participation of fellow Democrats – in education politics.