It is our intent with this section to provide relevant tools for students interested in learning about the history of labor. If there is a topic that you would like information on please contact us.

Compiled by the Everett Public Library

Sunday, November 5, 1916 marked the bloodiest battle in Pacific Northwest labor history. On that day, about 300 members of the Industrial Workers of the World (I.W.W.) boarded the steamers Verona and Calista from Seattle and headed north toward Port Gardner Bay.

The I.W.W. (or Wobblies) planned a public demonstration in Everett that afternoon, to be held on the corner of Hewitt and Wetmore, a spot commonly used by street speakers. Hoping to gain converts to their dream of One Big Union, the Wobblies began street speaking in Everett during a local shingle weavers' strike, encountering brutal suppression by local law officers. Free speech soon became the dominant issue. The number of demonstrators and the violence of the response from law enforcement grew as the weeks wore on. 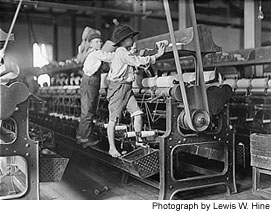 The Disgrace of Child Labor

Children Working In the Coal Mine Breaker Rooms in early 1900s

Youngsters Who Toiled In the Glass Factories

Photographs of Child Labor in the early 1900s by Lewis W. Hine