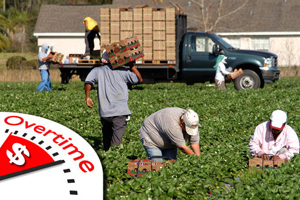 Olympia – With a strong 91-7 bipartisan vote on Friday, the Washington State House of Representatives passed SB 5172 to make Washington the first state in the nation to bring the 40-hour work week and overtime pay to all agricultural employees, some of the nation’s lowest-paid workers. A technical amendment was adopted that clarifies certain aspects of the bill but retains the measure’s application to all farm workers, so the bill now returns to the Senate for concurrence, where it already passed 37-12 and is expected to do so again.

“SB 5172 will end a racist legacy and correct an injustice that has existed for too long,” said Larry Brown, President of the Washington State Labor Council, AFL-CIO. “Washington’s labor movement thanks all the representatives and senators who voted to approve this bill, and the hundreds of supporters who contacted their legislators urging them to do so. We look forward to Senate concurrence and Governor Jay Inslee’s signature on this historic legislation.”

Passage of legislation assuring the 40-hour workweek and overtime pay rights for all Washington farm workers has been a priority for the WSLC and its affiliated unions, including the United Farm Workers and Familias Unidas por la Justicia. SB 5172 establishes a three-year phase-in period for the new requirement that agricultural employers pay overtime to their employees. Beginning in January 2022, overtime would be due after 55 hours of work in a week; in January 2023, after 48 hours; and in January 2024, after 40 hours.

Dairy workers, unlike other agricultural workers, would immediately be due overtime pay after 40 hours of work in a week, in keeping with the state Supreme Court’s decision in Martinez-Cuevas v. DeRuyter Brothers Dairy, Inc. In that case, the court ruled that dairy workers are due overtime pay “because they worked long hours in conditions dangerous to life and deleterious to their health.” Workers who are parties in that suit could be due back pay and damages, with interest, from DeRuyter Brothers Dairy, pending further action by the trial court.
For the approximately 65,000 agricultural workers and 6,000 growers in Washington who are not parties to the DeRuyter lawsuit, the bill would provide certainty by preempting lawsuits for back pay filed after the Supreme Court decision was issued on Nov. 5, 2020.

EDITOR’S NOTE — California also has approved overtime pay for farm workers. Under its phase-in schedule, larger agricultural employers have to pay overtime after 40 hours/week in 2022, but smaller growers have until 2025 to comply. Under SB 5172, Washington would be the first state in the country to have its overtime pay standard apply to ALL farm workers in 2024.