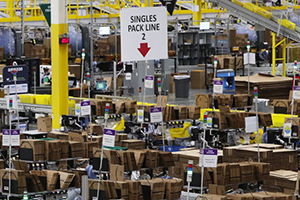 Recognizing that working in an Amazon fulfillment center is more hazardous than other types of warehouse work, Washington state’s labor agency announced Monday it will boost the commerce giant’s workers’ compensation premium rates by 15% starting Jan. 1.

That could potentially cost the Seattle-based company millions more a year than it’s paying now.

The new rates will be higher than more than 260 other industries, including mechanized logging and law enforcement.

Until now, the state Department of Labor & Industries (L&I) has grouped Amazon’s fulfillment centers with other kinds of warehouses when calculating premium rates, which are in part based on the number of injuries within industry-specific risk classes. That caused some grocery distributors and recycling facilities to complain that higher injury rates at Amazon’s 24 Washington fulfillment centers — where online orders are sorted, packed and shipped — were driving up premiums for the entire industry. Warehouse premium rates statewide soared 18% this year, compared with 2019.

“Bottom line, fulfillment centers are very different from a warehouse,” said Tammie Hetrick, the president of the Washington Food Industry Association, a group representing grocery distributors. “When Amazon had a poor performance, it affected everyone within the risk class.”

Reflecting its better safety record, the warehousing industry will see a 20% rate cut in 2021, bringing workers’ comp rates lower than any time in the past five years.
Since employees pay a portion of workers’ comp premiums, typically via an automatic paycheck deduction, the new rule also bodes well for traditional warehouse workers — many of whom, unlike Amazon’s fulfillment center employees, are unionized.

“The best way for Amazon to lower its premiums is to invest more in worker safety,” said Joe Kendo, government affairs director at the Washington State AFL-CIO labor council. In part, that could mean allowing workers to unionize, he said: Workers at a new Amazon facility in Alabama signaled their intent to form a union last week, citing “outrageous work quotas that have left many with illnesses and lifetime injuries.”

Nationwide, workers at Amazon’s fulfillment centers are injured at well over industry averages, according to an investigation by the Center for Investigative Reporting that blamed the company’s ambitious production quotas for the disparity.
Amazon is currently deep in what it calls “peak” season, when workers are expected to clock as many as 60 hours per week to meet holiday shopping demand. Amid coronavirus restrictions on in-person retail that have sent many shoppers online, the 2020 holiday shopping season has been the busiest in the company’s history, Amazon announced Tuesday. While the company is only reporting holiday sales figures this year for the third-party merchants on its marketplace platform, among those retailers, holiday sales are up 60% compared with 2019.

An Amazon spokesperson declined to respond to questions about the new workers’ compensation rates or why the company’s injury rates are so much higher than industry averages.

The actual amount Amazon pays in premiums next year will depend in part on how many claims are filed at its Washington fulfillment centers, in addition to how many workers the company employs. The equivalent of 5,146 full-time employees worked at Amazon’s fulfillment centers in Washington state as of March, according to L&I. Since many of Amazon’s workers are part-time, the actual number of fulfillment center employees in the state is likely far higher — and Amazon has been hiring like mad this year.

Since January, the company has added more than 400,000 workers nationwide, largely in fulfillment centers, to meet increased demand for online shopping. Amazon now employs 1.2 million people in the U.S. The company is still looking to hire 200,000 more regular and seasonal workers.