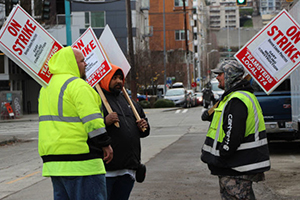 The Unfair Labor Practice strike by 34 construction drivers at Gary Merlino Construction continues, with pickets ongoing at GMC and Stoneway facilities in Renton and Seattle. In addition, striking workers have begun taking their show on the road, setting up pickets outside several major commercial construction jobs in the heart of Seattle. When met with the Teamster members’ primary picket lines, most unionized building trades workers chose to honor the picket lines, standing in solidarity with their fellow union members by refusing to cross picket lines to work on the projects.

At the heart of the Unfair Labor Practice strike is GMC/Stoneway management’s refusal to bargain in good faith to reach a contract with the Teamsters, despite the fact that all other construction companies covered by the regional AGC Agreement have already signed deals containing matching contract language and economic packages. Workers have been on their ULP strike since Nov. 19, continued picketing over the Thanksgiving holiday weekend, and are prepared to continue until they get a fair contract.

“I cannot believe this is how Gary Merlino has chosen to treat his employees, especially during the holiday season and after everything his employees have done for the Merlino family throughout the Seattle construction boom,” said Teamsters Local 174 Secretary-Treasurer Rick Hicks. “These workers just want to be treated the same as all their Brothers and Sisters in the construction industry, but Merlino will not even sit down at the table with us to hammer out a deal… “Settling this strike won’t be difficult for him. He just needs to swallow his pride and treat his workers fairly. Otherwise, we will have no choice but to continue to disrupt construction jobs until we get his attention and bring him back to the bargaining table.”

At 5:30 a.m. on Friday, Nov. 19, pickets went up at Gary Merlino Construction plants in Renton and Seattle as workers walked off the job in an Unfair Labor Practice (ULP) strike. The strike was called after GMC management refused to bargain in good faith with Teamsters Local 174.

The striking workers have set up picket lines outside several GMC facilities, and concrete mixer drivers for Stoneway Concrete, as well as customers and suppliers of Gary Merlino and Stoneway Concrete and their employees, have the right to refuse to cross the picket lines. The strike has impacted all construction and concrete operations for GMC/Stoneway, and will continue until GMC management returns to the bargaining table ready to negotiate in good faith to reach a deal.

“All we are asking is for Gary Merlino to come to the bargaining table and negotiate with us over contract terms all the other construction companies under Local 174 jurisdiction have already agreed to,” said Teamsters Local 174 Secretary-Treasurer Rick Hicks. “It is deeply offensive to us — and especially to these hardworking drivers — that their employer believes they are worth less than their Teamster brothers and sisters doing the same work. If Merlino thinks he can ignore us until we go away, he is wrong. We will stay out on the street as long as we need to get a fair contract for our members.”