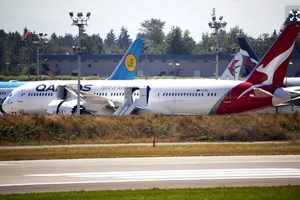 Boeing production remained at a low ebb in October, reduced by limited demand during the pandemic, a slow ramp-up of the 737 MAX assembly line and a complete block on 787 Dreamliner deliveries due to manufacturing quality problems.

Two Boeing Business Jets, corporate jet versions of the earlier 737 model, and two 737-based Navy anti-submarine planes were also built in Renton.
The remaining deliveries were four widebody freighter aircraft and one Air Force tanker, all built in Everett.

Boeing had zero deliveries of its 787, now built exclusively in South Carolina. More than 105 previously finished Dreamliners are parked in storage in Everett and North Charleston, South Carolina.

The continuing delivery drought leaves Boeing in a precarious position, analyst Nick Cunningham of London-based Agency Partners wrote in a note to investors Monday.
The 18 MAXs delivered this month are far less than the level needed to stanch the company’s cash bleed. Last month, Boeing reiterated its ambition to boost MAX production to 31 jets per month in early 2022.

But if deliveries don’t ramp up fast, that will mean more finished airplanes going into storage.

Boeing had in the past projected delivering this year around half of its large inventory of parked airplanes — about 400 MAXs and more than 100 787s — but that cannot happen now with most deliveries pushed out to 2022 and 2023, along with the revenue they bring.

“In the medium term Boeing still faces all the lasting damage issues of a serious and potentially permanent loss of market share, challenged or uncompetitive main commercial programs, and a heavy burden of debt,” Cunningham wrote.

He added that paying off the company’s massive accumulated debt — $62.4 billion as of the end of September — “will make it hard for Boeing to make the necessary investments to improve its competitiveness.”

With many airlines around the world engulfed in debt, airplane order activity is also low.

It had 10 new orders, including two large 777F freighters ordered by the Maersk shipping line, the second ocean shipping company this year to bulk up its airfreight unit as the pandemic creates gridlock at docks while air cargo delivery soars.

Boeing also restored a net total of 17 MAXs to its firm order book after previously taking them out because the orders were uncertain. Those orders were likely renegotiated, with concessions to the customers.

But Airbus had a net loss of eight jet orders for the month. Though it won 22 new orders, Alaska Airlines finally canceled orders for 30 A320neos that it inherited from its merger with Virgin America in 2016.

Though ahead of Boeing, that’s well short of the pace needed to reach Airbus’ declared target of delivering about 600 jets this year. To meet that goal, it would have to deliver 140 in the final two months of 2021.

Still, that’s not impossible. Airbus in recent years has consistently delivered a rush of airplanes toward year-end. It delivered 153 airliners in the final two months of last year.
Its October deliveries included two smaller A220s and 32 of the A320 jet family that competes with the MAX.

One of the widebody deliveries was an A380 superjumbo to Emirates. That enormous aircraft has been a sales failure and the last two off the assembly line in Toulouse are due to go to Emirates next month.

That will close out A380 manufacturing with a disappointing total of just 251 built.

The 787 Dreamliner, in contrast, was a huge sales success, with just over 1,400 ordered and nearly 500 of those still to be delivered.

Yet Boeing has delivered a grand total of 14 in the past year.

Dreamliner deliveries initially halted in fall 2020 when engineers discovered unacceptable gaps between fuselage sections. A few deliveries resumed in March, only to stop again in May after more defects showed up.

Boeing is still waiting for the Federal Aviation Administration to approve its proposals for inspections to ensure the quality issues on each jet are fixed.

Airbus’ total net orders for the year is an anemic 125 jets, far behind Boeing’s net total of 309 jets.

However, because Airbus soared far ahead in the couple of years the MAX was grounded, its total order backlog remains much higher than Boeing’s.

For sure, though, those enormous backlogs contain some less-than-solid sales and markedly fewer will likely be delivered than the backlog totals.

Alaska had previously listed its 30 A320neo orders as “cancelable purchase commitments” before removing them altogether last month in its financial filings. And though Airbus was still counting those jets as firm orders until now, the cancellation has long been inevitable since the Seattle-based carrier is phasing out even the A320neos it currently has in its fleet.

By the end of 2023, the only Airbus jet Alaska will operate is the hot-selling A321neo, which airlines are snapping up to fly long-range missions. Of the 22 new orders Airbus won in October, 21 were for the A321neo.

For example, AirAsiaX, the long-haul unit of AirAsia, has $8.1 billion in liabilities and is scrambling to avoid liquidation. Yet Airbus still list on its books AirAsiaX orders for 78 A330neo widebodies and 30 A321neos narrowbodies.

Parent company AirAsia, one of Airbus’ largest customers, has restructured its remaining 362 orders for the A321, pushing out some of those deliveries as far as 2035. While not formally canceled, deliveries scheduled so far out may never be delivered.

Likewise, Boeing has orders for 237 MAXs from Lion Air in its backlog that have to be considered doubtful.