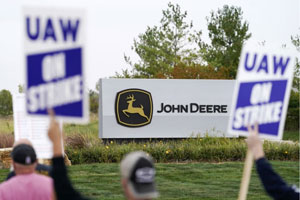 The U.S. is experiencing an unusual surge of strikes — 10,000 John Deere workers went on strike in October, and so did 1,400 Kellogg workers, and now 35,000 Kaiser Permanente healthcare workers are threatening to walk out.

Workplace experts generally point to two reasons for this surge. First, after working so hard and often risking their lives during the pandemic, many workers believe that they deserve better pay and treatment. Second, American workers — especially long-underappreciated essential and low-wage workers — are suddenly feeling empowered because of today’s labor shortage.

These factors have certainly helped cause the wave of walkouts, but there’s another huge but often overlooked factor behind the strikes: It takes two to tangle.

The companies that have faced strikes have often been stubborn and stingy — they’re part of a backward-looking group that is clinging to corporate America’s philosophy of recent decades: Squeeze your workers and battle your unions. They’re acting as if it’s still the 1980s when President Reagan’s move to crush the air traffic controllers’ union set off an era of anti-union attacks.

The corporations facing strikes don’t seem to realize that times are changing, with a labor shortage giving employees more bargaining power and with the public feeling greater sympathy for underpaid front-line workers as income inequality soars.

Neither Deere nor Kellogg seems to have gotten that message, nor did Nabisco, which recently faced a six-week strike. Nor has Kaiser Permanente, which has proposed a two-tier contract in which future nurses and other healthcare workers would be paid 26% to 39% less than current workers. Belinda Redding, a Kaiser Permanente nurse in Woodland Hills, feels insulted by that contract offer; after the nurses put their lives on the line day after day for months, Kaiser has offered a raise of just 1% a year for three years.

“It feels like almost a slap in the face,” Redding told me. Kaiser Permanente, a nonprofit with $45 billion in reserves, maintains that its compensation levels are 27% higher than “the average market wage” and are unsustainable.

Many companies, however, do know it’s time to treat workers better. Bank of America has raised its minimum pay to $21 an hour, while Costco has adopted a $17 minimum. CVS says it will raise its minimum to $15 by next July, and Amazon is raising its average starting wage to $18 an hour.

But some corporations view things differently, seeing it as a time for rollbacks and takebacks. Even though John Deere has forecast record profits of at least $5.7 billion this year, more than double last year’s level, and even though its CEO’s pay jumped 160% last year and it raised shareholder dividends by 17%, Deere originally offered its workers a basic raise of 12% over six years, which workers said wouldn’t begin to keep up with inflation. Chris Laursen, a painter at Deere’s farm equipment factory in Ottumwa, Iowa, earns $20.82 an hour after 19 years and complained that Deere first offered him a raise of just $1 in the contract’s first year.

The strikers were also angry that Deere proposed a new, lower compensation tier that would eliminate pensions for new hires. Deere and the U.A.W. leadership reached a tentative deal on a better contract offer on Oct. 30, but union members rejected that offer Tuesday and remain on strike.

Kellogg employees complain of working 30 days straight during the pandemic and frequent 12-hour and 16-hour shifts. After a grueling year, many were upset that Kellogg demanded a two-tier compensation system that would pay new hires $13 an hour less than current workers — the company says they average $35.26 an hour — and give them fewer benefits.

If today’s strikes have a specific cause, it’s management’s demand for two-tier pay systems that will mean lower wages and reduced benefits — indeed worse living standards — for future workers. To many corporations, demanding two pay tiers makes sense: It placates current employees by maintaining their pay and benefits, while reducing overall labor costs by paying future workers less. (Deere and Kellogg say they need a two-tier structure to cut costs and stay competitive.)

Of course, the reason corporate leaders love two-tier pay systems is that they undermine unions and divide workers. Two tiers foment tensions and make new employees angry at their unions for having agreed to management’s demands to pay new people less. And once established, two-tier systems are extremely hard to undo.

For unions, it may be tempting to trade away wages and benefits for future workers, who aren’t there to complain — yet. But there’s also rising resistance to corporate efforts to push down pay and living standards for the next generation. “These are our kids and grandkids. We don’t want a worse future for them,” said Laursen, the Deere striker.

In taking firm stances on this issue and others, unions are setting an economic justice agenda. By doing that, along with a spate of high-profile strikes, unions have won higher public approval this year than at any time since 1965.