Published Thursday, November 21, 2019 in The Stand 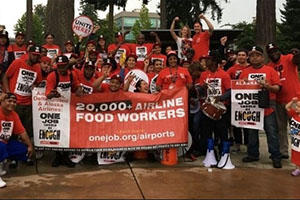 SEATAC — All union members and community supporters are invited to join UNITE HERE Local 8 airline catering workers at a protest at SeaTac Airport on Nov. 26 — the Tuesday before Thanksgiving and one of the busiest travel days of the year. They will join nationwide protests at more than 20 U.S. airports.

Through this march, workers will call on airlines to take urgent and necessary steps to ensure that workers who cater in-flight meals and beverages are able to escape poverty and access medical care. Over the summer, airline catering workers at SeaTac Airport voted overwhelmingly to authorize a strike when released, and federal mediation of contract negotiations continues.

TAKE A STAND! — The Washington State Labor Council, AFL-CIO urges all to join airline catering workers at the action on Tuesday, Nov. 26. Meet at 5:30 p.m. at the UNITE HERE 8 SeaTac office at the IBEW 77 building, 19415 International Blvd. in SeaTac (across from Angle Lake Park). Buses will leave at 5:45 p.m. to go to the airport. Please click here to RSVP that you plan to attend.

This will be among UNITE HERE Local 8’s largest protests ever at SeaTac Airport, and, collectively, this will be the largest demonstration of workers at U.S. airports in years.

UNITE HERE represents 18,000 airline catering workers at 40 airports. Most provide service primarily to Alaska, American, United and Delta airlines, which have made a combined profit of $50 billion over the last five years. The majority of workers at the nation’s two leading airline catering employers, LSG Sky Chefs and Gate Gourmet, earn less than $15 per hour and do not have affordable family health insurance. In SeaTac, 844 workers work for Sky Chefs and Gate Gourmet. They are predominantly people of color, and many are immigrants from around the world.

UNITE HERE Local 8 is the hospitality workers’ union and represents over 5,000 members working in the hotel, food service, and airport industries in Washington and Oregon, including 900 airline food workers at SeaTac Airport.  Learn more at www.unitehere8.org.