Trade Up! Introduces High School Students to a Career Path After Graduation 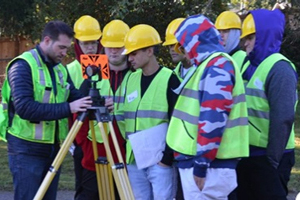 More than 70 high school students — a majority of which were juniors and seniors — attended the event on the former-Alderwood Middle School campus.

“The idea of this event is to get kids who are graduating into apprenticeships,” said College and Career Readiness Coordinator Susan Beard.

After hearing about the event’s success in north Snohomish County high schools, Beard said she was dedicated to bringing it to the Edmonds School District. According to Beard, the district has been working to educate students on alternative career paths besides earning a college degree, such as receiving non-degree credentials.

“If you have a credential, that means you have a skill set,” she said. “So, we’re really working hard to talk about credentialing versus college degrees.”

As students rotated through each trade, they were able to participate in hands-on activities like using a concrete breaker or land surveying equipment and building circuit boards used in waste management. Students also learned about benefits of unionized trade jobs, like competitive pay, medical and dental benefits and pension plans.

This is the first year the district hosted the event, which began when Leonard Kelley, Stanwood mayor and executive secretary-treasurer of Snohomish County Labor Council, said he noticed the need for more trade workers as many began to retire.

“We have a shortage of workers,” he said. “So, we thought, ‘What can we do to get kids the information?’”

Trade Up! was established in 2014 with the hope of reaching out to high school students nearing graduation and persuading them to choose trade apprenticeships.

The event has since been hosted at multiple north Snohomish County high schools. Through partnerships with the school districts, Kelley said Trade Up! is achieving its goal as an efficient way to teach students about careers through trade apprenticeships.

“It’s turned into a great thing now,” he said.

Now that the event has been brought into the Edmonds School District, Kelley said Trade Up! will be an annual event offered each year around October.

Students who are interested in learning more about careers in trades can speak with their school’s career counselor or contact the Snohomish County Labor Council through the labor council’s webpage.