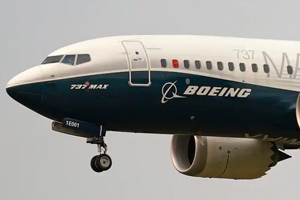 Boeing has agreed to pay more than $2.5 billion to resolve a charge that it conspired to defraud the Federal Aviation Administration during its review of the 737 Max, the airliner involved in a pair of deadly crashes that killed 346 people.

“Boeing’s employees chose the path of profit over candor by concealing material information from the FAA concerning the operation of its 737 Max airplane and engaging in an effort to cover up their deception,” Burns said in a statement.

The penalty is a combination of a $244 million fine, $1.77 billion in compensation to Boeing’s customers and a $500 million fund for the families of the crash victims.

Boeing admitted that two of its technical pilots deceived federal safety regulators about a software system that was implicated in both crashes. As a result of their deception, the Justice Department said, airplane manuals and training documents lacked information about the software, known as the Maneuvering Characteristics Augmentation System (MCAS).
The first Max crash occurred off the coast of Indonesia in October 2018, with another jet crash in Ethiopia the following March. The second crash led to the Max being grounded worldwide. It was approved by the FAA to fly again in November after design changes to the computer system.

Boeing’s agreement with the Justice Department required it to admit wrongdoing, but if the company adheres to its terms for three years, prosecutors will agree to dismiss the criminal case.

The FAA declined to comment, referring questions to the Justice Department.

The charge centers on what two Boeing technical pilots, previously identified as Mark Forkner and Patrik Gustavsson, knew about the functioning of the MCAS. The system initially was designed to function in extremely unusual circumstances, but was altered during the development of the Max. Once the technical pilots discovered the change in a November 2016 simulator session, prosecutors said they withheld information from an FAA team that determines what training should be required for pilots transitioning from the older version of the 737 to the Max.

“He did the exact opposite throughout his time at Boeing and has been completely committed to the safety of passengers and crew,” Bennett said. “Any claim to the contrary is false.”

David Calhoun, Boeing’s chief executive, laid blame with the two former employees and said they had shown “deep disrespect” for the company’s customers and the government.

“While we deeply regret the conduct described in the agreement, I am confident that it isn’t reflective of our employees as a whole or the culture or character of our company,” he said. “Every day I see members of our team communicating proactively and transparently with our regulators, even when — indeed, especially when — the issue is difficult.”

Attorneys for family members of those who died said they would continue to pursue civil cases against Boeing.

“It’s our position that these allegations are just the tip of the iceberg of Boeing’s wrongdoing,” said Robert A. Clifford, a Chicago-based attorney representing many of the families.

Emails and instant messages documenting the heart of the criminal case had previously been released as part of congressional investigations into the crashes. But the statement of facts assembled by the Justice Department details how the two pilots conspired to hold back information about MCAS from the FAA regulators.

When they discovered the design change, Forkner sent Gustavsson an instant message: “so I basically lied to the regulators (unknowingly).”

But rather than disclose the change, prosecutors say the pilots withheld the information. In early 2017, Forkner sent an FAA employee an email, which is cited in the charge against Boeing. Forkner asked the regulator to make a change in a forthcoming report.
“Delete MCAS,” Forkner wrote. “recall we decided we weren’t going to cover it … since it’s way outside the normal operating envelope.”

Had regulators known of the change, they might have required simulator training for Max pilots, which would have been expensive for Boeing’s customers.

Family members of those killed in the crash said they were outraged by news of the settlement.

“This is just a blip for Boeing,” said Nadia Milleron, who lost her daughter, Samya Stumo, on the Ethiopian Airlines crash.

The agreement also requires Boeing to report back to the Justice Department’s fraud section quarterly for at least three years to demonstrate its work to make sure employees comply with the law.

There have been similar efforts in the past to shape Boeing’s culture and behavior, including a 2015 settlement agreement with the FAA to address a pattern of recurring safety problems. At stake in that settlement agreement was millions of dollars in potential additional payments by Boeing if sufficient progress was not seen.

Now, though, the consequence of violating the agreement with the Justice Department would be a criminal indictment.