On Monday, September 5, elected officials and others spilled into an Everett Starbucks to support workers who voted to form a union. 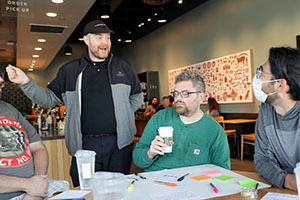 Carpenters secured a $10 raise. Baristas and cell phone salespeople won opportunities to bargain. Nurses and teachers had a platform to talk about inequities and safety issues at work.
There is, ostensibly, plenty for the local working class to celebrate this year.

Here in Snohomish County, historic Labor Day celebrations featured potato sack races and swimming at Silver Lake. Others included trips to Seattle for a picnic at Woodland Park, or to Mount Baker for skiing and tobogganing complete with live music from a Granite Falls band.

Things look a little different in 2022. But the energy remains the same, more or less.
On Monday, local elected officials, union representatives, laborers and supporters spilled into the Starbucks at 37th Street and Broadway in Everett.

Many ordered clear plastic cups of ice water marked “union strong” by a white ticket on the side. At one table, people made handheld signs.

“Solidarity is brewing,” another promised.

It was a solidarity “sip-in” to show support for Starbucks union workers. The store on 37th voted 13-1 to form a union earlier this year.

Similar sip-ins were slated for the holiday weekend at over 100 Starbucks locations across the United States They’re modeled after sit-ins, where patrons come in, order cheap drinks or water and leave large tips. The sip-ins are aimed at building conversation and community.

Starbucks workers’ union drive kicked off late last summer at Starbucks stores in Buffalo, New York. Since then, workers at 227 stores have won their union elections, according to Law360’s Starbucks union tracker.

Everett City Councilmember Mary Fosse walked through the store’s front door adorning a red bandana and tinted aviator sunglasses. She left a $5 dollar tip for the baristas on her coffee order.

Even historically speaking, Everett is a union town,” John Traynor, the political director for the International Brotherhood of Electrical Workers 191.

“To get more context behind the meaning of Labor Day is to go back 100 years,” former Daily Herald editor Eric Stevick wrote in 2017.

It was a time when local lumber mill workers were fighting for an eight-hour work day. Federal child labor laws were recently enacted.

Ten months before Labor Day 1917, seven people, including five members of the Industrial Workers of the World union, were shot and killed at the Everett waterfront. A half-dozen others aboard the Steam Boat Verona disappeared in Port Gardner that afternoon, never returning to pick up the union cards they’d left at the IWW Hall in Seattle that morning.

The confrontation, known today as the Everett Massacre, has been described as the bloodiest battle in Pacific Northwest labor history.

Earlier this week, The Seattle Times reported workers in Washington state are unionizing “at the highest rate in years.” That movement is mostly led by Starbucks baristas, according to the Times.
Nurses and healthcare workers at Everett-based Providence hospitals are pleading for their company’s leaders to tackle staffing shortages. Last month, they described patients waiting in hallways for care; not having enough nurses on a floor to respond to a heart attack; and feeling plagued by work-related worries when they go home.
Union workers have the power to “transform the lives of both the people we serve and the communities in which we live,” said Justin Fox-Bailey president of the Snohomish teachers union. “It isn’t just about making sure that you can afford your rent or your mortgage or your food or your health care.”
Union workers in Snohomish County have shown it’s also about having the ability to speak up about injustices, Fox-Bailey said.
While Labor Day looks a little different now than it may have a century ago, it’s important to be aware of the struggles that continue today, he said.

“The people doing the work,” Fox-Bailey said, “the people who are who are making our coffee and picking our fruit and writing our articles, they are not seeing the benefits of their work (in) the same way as those people who own the business.”