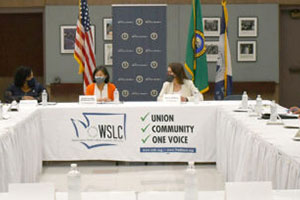 United States Trade Representative (USTR) Katherine Tai and U.S. Rep. Suzan DelBene (D-WA, 1st) met with Washington state labor leaders last Thursday at the Machinists District 751 hall in Seattle for a roundtable discussion on the impacts of trade policy on working families. Tai serves in a Cabinet-level position as the Biden administration’s principal trade advisor, negotiator, and spokesperson. DelBene is vice chair of the House Ways and Means Committee, which has jurisdiction over trade policies.

“Everyone at this table understands the importance of trade to supporting good family wage jobs,” said Cherika Carter, Washington State Labor Council Political and Strategic Campaign Director, who facilitated the roundtable. “But we also have seen with our own eyes the damage that can be done by trade rules that don’t ensure workers share in the prosperity they create.”

Joined by representatives from the Machinists 751; Society of Professional Engineering Employees in Aerospace/IFPTE 2001; Teamsters Joint Council 28; the International Longshore Workers Union; and the Washington Fair Trade Coalition (also representing the Association of Western Pulp and Paper Workers), there was a robust discussion about specific trade policies and practices hurting Washington industries and costing workers their jobs.

“I can’t stress enough, the importance of 737 MAX aircraft to our community,” said IAM 751 President Jon Holden. “When it is built at the highest production rates. We have over 9,000 members on that aircraft, right here in Washington. That’s just IAM members. There are thousands of other workers supporting the 737 build as well. We need to ensure that the 737 MAX is cleared to fly in China as it is everywhere else. This should not be held up any longer. We need China to move on that.”

Among other issues, concerns were raised about:

●  China’s manipulation of markets and low labor standards and the impacts on aerospace, aluminum and woods products industries.
●  The importance of using tariffs and border taxes effectively to protect U.S. jobs and ensuring robust enforcement against trading partners that violate trade law, environmental standards and workers’ rights.
●  How the constrained flow of goods in and out of U.S. ports is stifling economic growth and hurting port and freight workers.

Tai welcomed the input of Washington’s labor community and assured labor leaders that the Biden Administration is committed to “trade policy that is crafted with workers for workers.” With support from late AFL-CIO President Richard Trumka, the USTR has established a vision for a worker-centered trade policy that “lifts wages, empowers workers, and expands economic opportunity at home and around the globe,” she said.
Tai also emphasized the importance of continuing to invest in our infrastructure and our workers. She said that passage of the bipartisan Infrastructure Investment and Jobs Act, with strong Buy American provisions, will “create good-paying, union jobs and position the United States for economic success in the 21st century.”
Washington’s labor leaders committed their support to making the vision of a worker-centered trade policy a reality.