A “leaflet action” was organized, as nurses continued to speak out about staffing shortages and safety concerns in Everett. 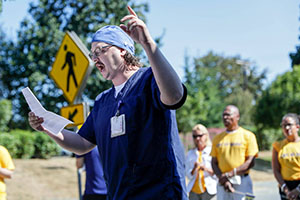 Gina Noel works with patients fresh out of cardiac procedures.

She’s one of five nurses on her floor at Providence Regional Medical Center Everett. If it was fully staffed, she would be one of 10.

“Since that’s all of the nurses on the floor, when we have a code, who’s watching the other 20 or more patients that are acute cardiac patients that could be next to code?” Noel said.

It was one of the many stories nurses shared early Wednesday in a pair of demonstrations outside Providence’s two Everett hospitals.

Patients are waiting for hours in a chair in the hallway for treatment, nurse Trevor Gjendem said. Some never make it to a private room, Noel said. Instead they are treated on a bed in the hallway.

And they’re waiting days for a test they need “right now,” Gjendem said.

Gjendem was hired as a medical-surgical nurse. He said he has moved around a lot over the last few years.

“We used to be ‘orthopedics,’” he told a crowd. “Now we’re just ‘whatever happens.’”

Wednesday’s “leaflet action” was organized to continue speaking out about staffing shortages and safety concerns.

Providence issued a statement as nurses lined the sidewalk outside their two Everett campuses.

“We respect the rights of our caregivers to be part of a union and to engage in this action and other lawful activities,” the statement reads.

Providence officials argued staffing shortages “are due to the pandemic, exhausted staff, lack of a national talent pipeline, and about 100 patients at Providence Everett who are medically stable but do not have a safe place in the community to be discharged.”

They said Providence “has been hiring and filling open positions as fast as possible,” hiring travel nurses to fill gaps and offering caregivers “incentives to work extra shifts, recognition bonuses, and signing bonuses.”

Health care workers said Providence leaders aren’t doing enough to recruit or retain staff.
Some called for a reinstatement of extra shift bonuses, so staff can receive extra compensation for coming in on their day off. Many demanded hazard pay and retention bonuses to show appreciation for those who have stuck it out.

For every one or two nurses that are hired, Providence may be losing five, said Heidi DeBauge, a trauma nurse in the emergency room.

“Upper management has stood in silence as we’ve watched our departments hemorrhage nurses,” she said. “There’s no hazard pay. There’s no incentives. There’s no exit interviews to explore why their staff is leaving.”

DeBauge and others argued it’s hard to hire or keep nurses at Providence because most who are qualified “are refusing to participate in unsafe staffing, the mental toll, the poor quality of care that we’re being asked to provide.”

“The primary challenge that Washington hospitals are facing is not related to the supply of qualified nurses,” the report states. “Rather, the challenge stems from difficulty retaining nurses.”
Ame Solomon, a lactation consultant at the Providence Pavilion for Women and Children, said a big part of her job is comforting young nurses who are burnt out. It’s common to see nurses start their shift at 7 a.m. and not have time to grab a bite to eat or use the bathroom until mid-afternoon, Solomon said. People are exhausted.

“It’s hard to keep the morale up,” Noel said.

Nurses from the hospital have been raising the concerns for over a month. They’ve made public comments at the Everett City Council’s weekly Wednesday meetings.

Swedish leaders told Verdant Health commissioners the move would be a result of staffing shortages. In the first half of 2022, the Edmonds hospital lost 42 nurses, according to Swedish.
Meanwhile, the two Everett hospitals need to hire more than 250 nurses, Redick told the Everett City Council earlier this month.

On Wednesday, dozens of nurses spoke and passed out flyers with information on how to report unsafe staffing levels to the state.

“When workers speak, and speak up, and are trying to raise concerns, we should listen,” said Sarah Cherin, chief of staff for UFCW 3000, the union representing Providence health care workers.

Earlier this month, Fosse said she and council members Paula Rhyne and Don Schwab were working with those nurses and their union to draft something in support of the nurses.

A van beeped while backing up in the Providence Pavilion for Women and Children. Solomon cringed.

“That actually sounds a little bit like the call bells,” she said, referring to a button that patients press to call a nurse for help.

“When you go home from work, you hear call bells, or babies crying,” Solomon told The Herald. “Being a nurse isn’t just being here for your patients. It’s really your life. It’s your lifestyle, everything. It’s your whole life.”