Published August 6, 2019 in the Everett Herald 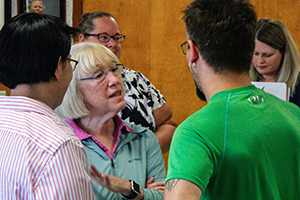 The Protecting the Right to Organize Act aims to boost collective bargaining.

U.S. Sen. Patty Murray listened to local labor leaders in Everett on Monday to get their take on a bill that would make it easier for workers to unionize and collectively bargain.

The four-term senator touted the Protecting the Right to Organize Act with representatives from the Snohomish County Labor Council and the Teamsters, Machinists and other unions. The bill would impose penalties on companies that violate worker rights laws and boost protections for employees who protest or seek union representation. Murray said the bill is needed to help working-class Americans.

“I know here in Everett you know the importance of unions,” she said. “A lot of people talk about the economy being great, but I see too many people where it’s not working — people who go to work every day and don’t get the salaries they need and don’t get the support they need. Today we have an economy that works for those at the top and who invest in Wall Street, and corporations that are nameless. But the average workers are feeling less and less secure in this economy and we need to right that.”

The Senate bill has 40 co-sponsors, including fellow Democrat Maria Cantwell, Washington’s other U.S. senator. Murray said she doesn’t expect the bill to gain ground in the Senate without prior success in the country’s other legislative body.

“The exciting part is we have folks in the House who have picked this up,” Murray said. “That means people will start hearing about it and understanding the impacts.”

At the meeting in Everett, union leaders aired grievances about negotiations, low enrollment and declining benefits.

Mike Raughter, an organizer for the Teamsters Union, said workers are voting against joining the union because of fear of retaliation by their employers. He said the added protections make the bill a “great equalizer.”

“(Companies) get rid of people knowing darn well we’ll file the (appeal) and we’ll get (the employees) back, but by the time we get them back, the campaign is over,” Raughter said. “Everybody else sees these people were fired and gets scared and votes (against forming the union).”

Tara McIntosh is a member of the local Office and Professional Employees International Union. She works as a records specialist at Providence Regional Medical Center Everett. Now negotiating her fourth union contract, she said her health care benefits have decreased dramatically since joining the hospital eight years ago.

“This is the worst experience we’ve ever had,” she said. “It’s one takeaway after another.”

Previously, she said, she and colleagues received free health care from the hospital. Now, they pay up to $800 a month. Additionally, benefits that once covered her family now only apply to her.

“I realize it’s not just us, it’s across the board,” she said. “But when you’re in health care, you’d think you could do better.”

Another frustration voiced by labor heads was stonewalled negotiations. The bill also would add mandatory arbitration and mediation if a union and employer can’t reach an agreement on their first contract.

“Constantly, companies have told our members or people we’re trying to organize that, ‘You know what? We just have to talk to you. We don’t need to agree to anything,’ ” said Raughter, from the Teamsters. “With (the new bill), they’re going to have to sit down and bargain in good faith.”

The bill would also implement “fair-share fees.” This allows unions to negotiate with companies so they can collect money to cover the costs of collective bargaining. It’s meant to prevent what unions call “free riders,” people who enjoy the benefits of union representation without paying dues.

Snohomish County Labor Council secretary and treasurer Leonard Kelley said the act matters to all employees, not just those in a union.

“I think over time, the rights of people who go to work every day have eroded so dramatically and people don’t realize unions, because they collectively bargained representing everybody, are there to make sure everybody who worked for major employers or corporations had a voice and equal opportunity for better pay (and) health benefits,” she said.