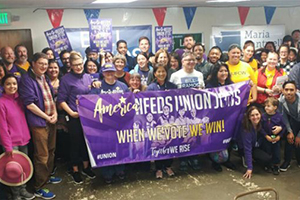 One year after Janus, the right-wing group’s plan to destroy unions in Washington and along the West Coast is a complete failure. In fact, its backfiring on them.

The Olympia-based Freedom Foundation has been making frivolous claims about the success of the anti-union campaign it has been running for the better part of five years and trying to position itself as the preeminent corporate backed, right-wing organization attacking unions along the West Coast.

Nothing could be further from the truth. After five years and more than $20 million spent, the Freedom Foundation (aka Opt Out Today) has been a massive failure.

In the fall of 2014, the Freedom Foundation, under then new CEO Tom McCabe, launched its so-called “opt-out campaign” in Washington by targeting home care workers, badgering them about their union membership and trying to persuade them to stop paying union dues.

Despite the organization’s tax-exempt status, which strictly prohibits spending for political purposes, McCabe made it very clear that the Freedom Foundation’s mission is to win elections for extreme right-wing politicians in order to push a pro-corporate agenda.

That year at a political fundraiser for Republican state Sen. Lynda Wilson, McCabe said, “When I got to the Freedom Foundation – it was about 13 months ago – I told my staff, ‘we need to fight unions.’ Because unions have corrupted [Washington], they have ensured that [Washington is] the bluest state in the country. And I told my staff, all these things we’re fighting for, whether it’s property rights, whether it’s lower taxes, whether it’s less government spending, whether it’s agencies that are duplicating efforts — all of that stuff cannot be accomplished until the power of unions has been dissipated, until we reduce that power of the union, until frankly we defund it.”

In 2018, groups like the Freedom Foundation thought they had won a major victory, when the Supreme Court attacked public sector unions and collective bargaining in its Janus decision.  They thought they could target all public sector workers with their campaign.

But the size and scope of their campaign has been vastly overstated as their tactics have been reduced to emails and low-dollar online advertising. One year after the Janus decision, unions along the West Coast survive and thrive as a powerful voice for working families, and in many cases their membership is growing.

In fact, according to the Bureau of Labor statistics, overall union membership in Washington grew by a whopping 10% in 2018.

There is a crippling flaw at the heart of the Freedom Foundation’s campaign. The unionized workers being targeted just aren’t buying the propaganda. Workers understand they only win at the bargaining table if they stay strong together. Because unions win higher wages for their workers — 20% more wages than non-union workers over the past 80 years, not to mention a huge advantage in benefits and rights on the job.

Furthermore, union members know that the Freedom Foundation is part of the same right-wing network that has fought for decades to cut their wages, pensions and health care.
In 2011, the Freedom Foundation co-authored a guidebook with the American Legislative Exchange Council (ALEC) on how states could cut labor costs which included layoffs, cutting pensions, privatization, gutting retiree healthcare, and hiring freezes.

Meanwhile, the Freedom Foundation’s scheme to turn Washington into a “red state” continues to be a fool’s errand. Democrats now hold nearly every statewide office and increased their majority in the State Senate. Washington’s Congressional Delegation is getting more blue as Dr. Kim Schrier flipped the 8th Congressional District and became the first Democrat to ever win the district in 2018.

These political victories have resulted in an unprecedented pro-worker agenda. Since the Freedom Foundation began operating, Washington, along with California and Oregon, have collectively passed one of the most pro-working family agendas in history. This includes statewide minimum wage hikes, increased education funding, paid sick leave for all, and fair scheduling laws — exactly the kind of pro-worker measures the Freedom Foundation was hoping to squash.

As we near the one-year anniversary of the Janus decision, we are certain to hear familiar false boasting from the Freedom Foundation and their ilk. The facts, and recent history, tell a very different story. Renewed vigor and commitment in labor unions, wins at the bargaining table, pro-worker politicians winning at the polls, and massive rollouts of family-friendly legislation — all in spite of the Freedom Foundation’s multi-million-dollar efforts.

In a nutshell, this is what failure looks like for a right-wing union busting group. And victory for every working family across the West Coast.