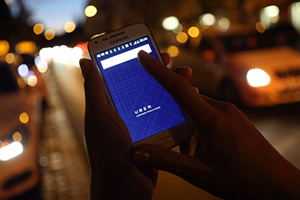 California is one step closer to protecting "gig economy" workers' rights, moving forward a bill that tightens regulations on company's like Uber and Amazon that classify some workers as independent contractors.

The state Assembly on Thursday passed a proposal by a 59-15 vote that would restrict corporations' ability to bypass labor laws.
The bill now heads to the state Senate.

The new law would benefit workers across a variety of fields, but the problem has seemingly grown with the rise of service apps.
"This kind of started with Uber and Lyft, but now we’ve seen a proliferation of this business model that is essentially built around this classifying workers as independent contractors and cheating those workers out of basic protections in the law," said Steve Smith, spokesman for the California Labor Federation.

The labor federation sponsored the bill.

"It's becoming a bigger and bigger problem, especially here in California and all around the country," Smith said.

If passed, the bill known as AB5 would codify into law the decision in the California Supreme Court Dynamex case. Last month's court decision ruled that businesses should follow the "ABC" test to decide if a worker is an employee.

"We’ve seen some of the frustrations recently with the massive Uber and Lyft strikes that happened. Workers are fed up and this, I think, is a hugely important bill to hold those large corporations accountable and get those worker basic protections that they deserve," Smith said.

State Rep. Lorena Gonzales (D) applauded her colleagues for the bipartisan support on the bill she authored.

"Big businesses shouldn't be able to pass their costs onto taxpayers while depriving workers of the labor law protections they are rightfully entitled to," Gonzalez tweeted Thursday.